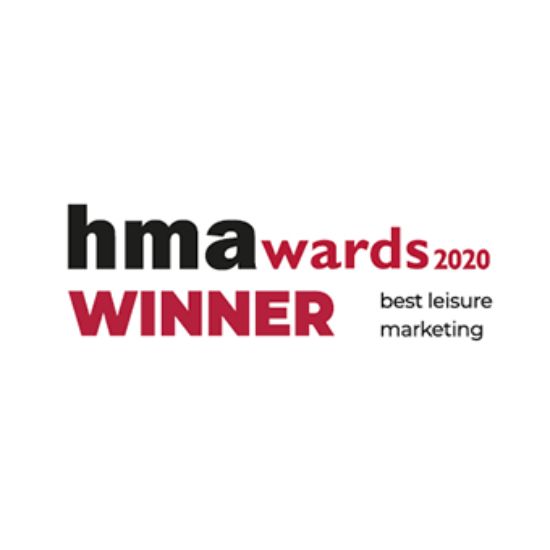 2019 was a big year for us here at DHM. We grew as a business, taking on multiple new team members, new clients, new partnerships and with that, exciting new challenges. Riding off the back of what was an incredibly enjoyable and successful year, we’re thrilled to announce that our efforts have resulted in us winning not one, not two, but three awards for our work at this year’s Hotel Marketing Association Awards.

With Coronavirus throwing more than a slight spanner in the works, the awards ceremony itself was cancelled and the results were instead announced over the course of several weeks on social media. In addition to keeping us in suspense, the announcements were a very welcome round of good news at what was otherwise a testing time.

Having won the award for Best Wedding Marketing in 2019, we were keen to defend our title, so you can imagine our elation when it was announced that we had also won the award this year, for our work with Rogerthorpe Manor. The WeddingDates Method was described as ‘exceptional’ with the judges praising our focus on the emotional aspects of a wedding purchase, as well as the combination of technology, creativity, the WeddingDates CRM and a professional sales approach.

We’ve seen some fantastic results from the WeddingDates Method since it was launched at the end of last year (over 150 weddings booked, and counting!), so we are delighted that this has been recognised by such a prestigious body in the hospitality industry.

On the subject of recognition, our work on The 100 Club campaign, set up as part of the centenary celebrations for Cottage In The Wood, also scooped an award. Taking home the trophy (figuratively speaking) for Best Leisure Marketing, The 100 Club was praised by the judges for its execution, incorporation of multiple channels and ability to not only produce substantial revenue, but also to inspire and build guest loyalty.

Having worked on the project with Cottage In The Wood from its very inception until the present day, we’re thrilled that their willingness to try something new and to really make it their own, has resulted in The 100 Club winning an award – well done to all the team at Cottage In The Wood!

Last but by no means least, we are also extremely proud to announce that our Account Director, Amy, has been awarded the title of Agency Young Marketer of the Year. In the social media post announcing the award, the HMA stated that Amy had “demonstrated a proactive approach, good understanding of [her] client’s business and a broad use of the marketing mix”.

In addition to thanking the HMA for their recognition, we’d like to extend a huge congratulations to the rest of this year’s winners.

Needless to say, we can’t wait to celebrate at the 2021 awards!

Digital Advertising Digital Marketing Facebook Google Adwords Hotel Awards Hotel Marketing Photography Website Design Wordpress
We use cookies on our website to give you the most relevant experience by remembering your preferences and repeat visits. By clicking “Accept”, you consent to the use of ALL the cookies.
Do not sell my personal information.
Cookie SettingsAccept
Manage consent

This website uses cookies to improve your experience while you navigate through the website. Out of these, the cookies that are categorized as necessary are stored on your browser as they are essential for the working of basic functionalities of the website. We also use third-party cookies that help us analyze and understand how you use this website. These cookies will be stored in your browser only with your consent. You also have the option to opt-out of these cookies. But opting out of some of these cookies may affect your browsing experience.
Necessary Always Enabled
Necessary cookies are absolutely essential for the website to function properly. These cookies ensure basic functionalities and security features of the website, anonymously.
Functional
Functional cookies help to perform certain functionalities like sharing the content of the website on social media platforms, collect feedbacks, and other third-party features.
Performance
Performance cookies are used to understand and analyze the key performance indexes of the website which helps in delivering a better user experience for the visitors.
Analytics
Analytical cookies are used to understand how visitors interact with the website. These cookies help provide information on metrics the number of visitors, bounce rate, traffic source, etc.
Advertisement
Advertisement cookies are used to provide visitors with relevant ads and marketing campaigns. These cookies track visitors across websites and collect information to provide customized ads.
Others
Other uncategorized cookies are those that are being analyzed and have not been classified into a category as yet.
SAVE & ACCEPT